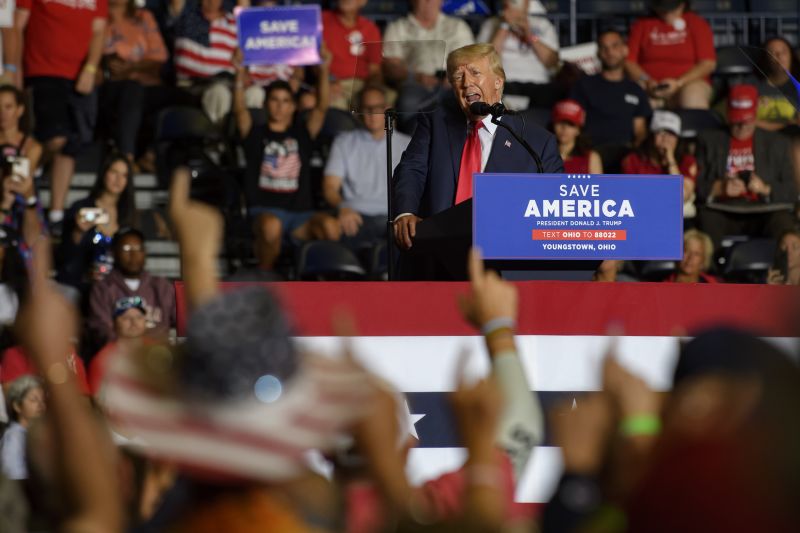 CNN —Supporters of QAnon on former President Donald Trump’s social media platform have celebrated what they see as his renewed embrace of the conspiracy theory over the past week after he shared a meme that was viewed as one of his most brazen nods to QAnon yet.
The meme Trump shared on Truth Social included an illustration of him wearing a “Q” on his lapel and two QAnon slogans – “The storm is coming” and “WWG1WGA” (Where we go one, we go all).
As he did that, a group of his supporters in the crowd began pointing in unison toward the sky.
“Once we saw that, we realized we might have a problem,” a Trump aide told CNN.
But the post was welcomed on Truth Social by followers of the conspiracy theory, who believe in the existence of an evil cabal and view Trump as their hero.
Trump has previously shared QAnon-adjacent memes – often retweeting conspiracy theorists while president before he was removed from Twitter.
“The QAnon stuff is way over his head,” claimed one Trump adviser describing a generally held view in his orbit.
And while major social media platforms like Facebook and Twitter have had policies in place since 2020 that prohibit explicit QAnon content, the Trump-era conspiracy theory is thriving on Truth Social.
One, named after the QAnon slogan “WWG1WGA” and available on Spotify, is by an artist named Richard Feelgood.
Trump’s team says they sourced the song from the latter, using a stock music software.
The song was first used by the Trump team in a walkup video at the Conservative Political Action Conference in Dallas in early August.
While one aide noted that a small group of supporters raised their fingers during that Pennsylvania rally, the team did not think much of it.
Source