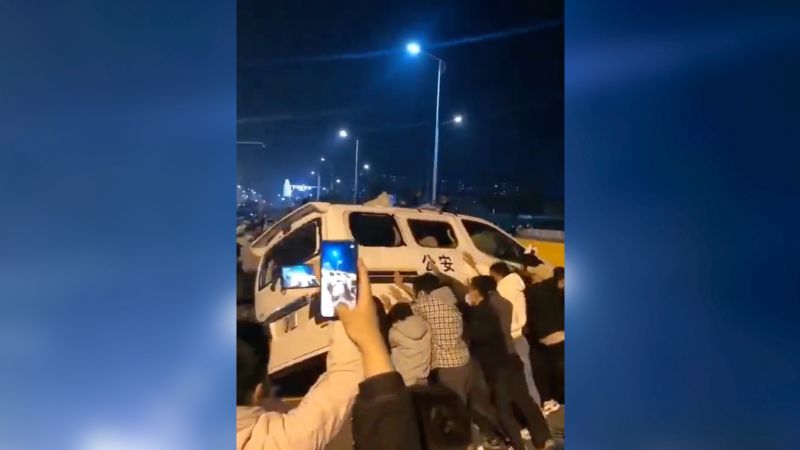 Hong Kong CNN Business —Foxconn has offered to pay newly recruited workers 10,000 yuan ($1,400) to quit and leave the world’s largest iPhone assembly factory, in an attempt to quell protests that saw hundreds clash with security forces at the compound in central China.
In the message, seen by CNN, the company urged workers to “please return to your dormitories” on the campus.
It also promised to pay them 8.000 yuan if they agreed to quit Foxconn, and another 2,000 yuan after they board buses to leave the sprawling site altogether.
Scenes turned increasingly violent on Wednesday as workers clashed with a large number of security forces, including SWAT team officers.
Some workers were seen tearing down fences, throwing bottles and barriers at officers and smashing and overturning police vehicles.
Obtained by CNNThe protest largely tailed off around 10 p.m. on Wednesday as workers returned to their dormitories, having received Foxconn’s payment offer and fearing a harsher crackdown by authorities, a witness told CNN.
“The new recruits had to work more days to get the bonus they were promised, so they felt cheated,” the worker told CNN.
Apple, for which Foxconn manufactures a range of products, told CNN Business that its employees were on the ground at the Zhengzhou facility.
Videos showed workers clashing with security guards and fighting back tear gas fired by police.
Videos showed columns of police vehicles, some marked with “SWAT,” arriving on the campus, normally home to some 200,000 workers.
More workers joined the protest after seeing livestreams on video platforms Kuaishou and Douyin, the Chinese version of TikTok, the worker told CNN.
Having worked at the Zhengzhou plant for six years, he said he was now deeply disappointed by Foxconn and planned to quit.
Source